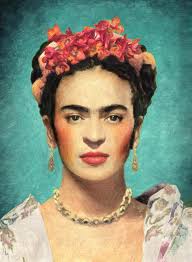 I have just left a party that I was slightly dreading, not because I didn’t think it would be brilliant, because these people throw a major good party…. I went as Frida Kahlo above… dreading because I was going to be the sober boring one…  It was a younger crowd than normal and I was thinking I was not going to know anyone.  A couple of years ago at their annual bash, I got nice and sozzled, and had a perfect hangover.

Anyway, long story short I was asked to babysit tonight for some people who were going to same party.  I decided that I would show my face and then swap places with the dad, who had work to do… I left at 10… but I was SAD to leave.  I was having a brilliant time, and would have loved to stay until the dancing started and have a massive boogie.  I caught up with people I have not seen in ages, met new people, and generally had a smashing time.  I guess its quite sad that in 10 months I could say it is the first proper do that I have been to… Well here is to many more.

I am so pleased.  I did not feel like a social outcast.  Yippee.

Approaching fifty, life about to change and want to try something different.... View all posts by barbsfalkiner

Motherhood, health and beyond

Reflections, thoughts and conversations on the essence of life

Life in the Hot Lane

The Bumpy Road of Life as a Woman 45+

Tired of Thinking About Drinking
Mycuppatea

Drink differently. A journey in a sober experiment.

Hearing the cries of Wounded Angels

The latest news on WordPress.com and the WordPress community.